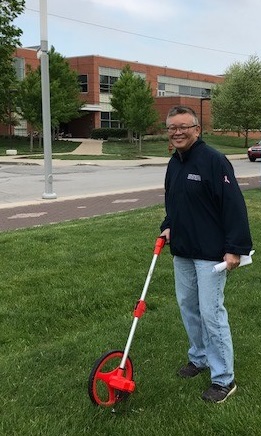 Jim Furuya started volunteering with Komen Central Indiana in 1998 when his friend, a former Race Chair, encouraged him to join the committee. At the time, Jim was doing multiple volunteer projects around Indianapolis and decided that the Race for the Cure sounded like a good thing to do. Lucky for us, he has been involved ever since.

At Jim’s first Race, his volunteer responsibility was to escort the TV crews around. Once the crews were at set up Jim remembers finding himself stuck in a traffic jam of people. He took it upon himself to unblock the crowded walkway. Looking back, that small incident contributed to landing his career in event planning.

Today, Jim is a member of the Executive Race Committee. His area of expertise revolves around Race day logistics. In this role, he helps order tents, signs, generators, and many other supplies that are needed for the Race, which hosts about 13,000 participants in Military Park each spring. This year Jim is responsible for the main stage DJ, portable sanitation centers, the forklifts and other heavy equipment.

Jim has also been named the 2018 Central Indiana Race Chair, and he says he is looking forward to sitting in on different committee meetings to see the hard work that other committee members put into this event. He is also excited about the possibility of driving the pace car, which is a perk of being the Race Chair!

When he isn’t traveling the country to help coordinate large races as part of his job, Jim continues to volunteer with Komen Central Indiana because he is personally invested in the success of Komen and Race for the Cure. He uses his skills to give back to the community, and hopes to see Race continue to grow. Jim says he loves to see all the hard work that goes into planning Race pay off when Military Park fills with people on Race day.

“It’s been a pleasure and an honor to meet and work with a lot of dedicated people who have given their time and efforts for Komen,” Jim said.

Even though the 2017 Race was cancelled due to the weather, Jim was in the rain all day helping clean up the park. We at Komen Central Indiana are already looking ahead to next year and can’t wait to see everything Jim brings to the table as next year’s Race Chair!

From the whole Komen Central Indiana family, thank you for your contributions! You truly make a difference