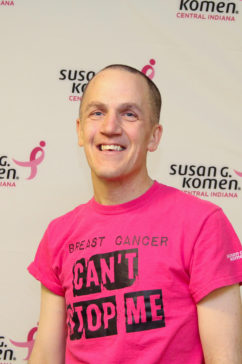 Tony knew he had a lump under his left nipple for almost a year, yet thought it was irritation. His wife convinced him to go to primary care physician to get it checked out. As man in his mid-40s, he received news that he never thought he would hear — Stage 4 breast cancer.

The cancer spread to his lymph nodes, hip, and both lungs. He underwent immunotherapy. One of the challenges during his cancer journey has been the lack of family medical history due to Tony being adopted. One of his biggest fears was the cancer being genetic and his daughters being at risk. Thankfully, the results came back and that was not the case.

Tony has a great support system during this journey. His wife and children have been a constant source of comfort. His church family has kept him in good spirits. As a high school social studies teacher at Columbus East and a coach at the local middle schools, Tony also receives support from his students from and his running teams.

“Be self-aware and stay in tune with your body. A cancer diagnosis is not an end but the beginning to a new chapter in life, one in which priorities are re-examined and our need for support from each other is crucial.”

When Tony participated in Susan G. Komen’s walk in Evansville last year, he was the only male survivor in attendance. It became apparent to him that there is a pressing need to spread breast cancer awareness to other men.