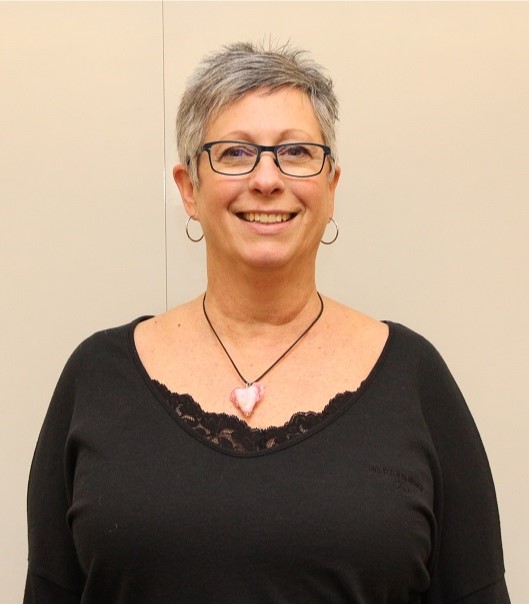 After feeling a lump on her breast while in the shower, Sally made a mental note to call and schedule a mammogram. At the appointment, they verified the lump and then did an ultrasound. The doctor said the lump didn’t show signs of being a cyst and that a biopsy was necessary. Sally began to think of her children, her oldest who was 29, her son who was 19 and getting ready to graduate high school, and her youngest who was 14 at the time.

The next day Sally’s oldest daughter accompanied her to the appointment. After 12 samples were taken, her fears grew.

She went to the bathroom and looked in the mirror and said to herself, “Pay attention to what is happening right now because your life is about to change.”

Within the following days, Sally received a phone call at work confirming her breast cancer diagnosis.

At the time, Sally worked at a car dealership where her coworkers were predominately male. She went into her boss’s office, who was also her friend and whose wife is a two-time breast cancer, told him what was happening and just cried. Even though Sally has been a single parent for 14 years she has a wonderful man in her life and he was the first person she called, followed by her sister. She left work and went to be with her family and friends and even enjoyed some tequila the night she found out.

Sally says she never thought she would be the girl who got that phone call. While researching triple negative breast cancer she realized she didn’t know much about the disease, including that there were multiple types of breast cancer.

One of Sally’s customers at the car dealership happened to be an oncologist, and she scheduled an appointment with her. During her appointment, the first question she asked was how to tell her children. Afterwards she had lunch with her 19-year-old son who was preparing to go to boot camp to become a Marine shortly after graduation.

After telling him about her diagnosis he was reluctant to follow through with his plans, but she reassured him, saying that she had a huge support system here and that him staying was not an option. Lastly, Sally told her youngest daughter and many other people even though it was very difficult to share the news.

Sally had 20 weeks of chemotherapy with transportation help from her sister. The night before her son was supposed to leave for boot camp, during her treatment, Sally had to go encourage him to get on the bus because if it were up to him he wasn’t going to.

She remembers telling him, “You have 13 weeks of hell in front of you, and I have 12 more of chemo. We are not quitters. We are both going to be victorious.”

In the end they compromised; her son went to boot camp but he asked his best friend to stop by and check on his mom monthly – a promise he still keeps to this day.

After chemotherapy was over, Sally had a double mastectomy on Halloween. She says she is very thankful she decided to do the double mastectomy because during the six weeks between her chemo treatments and surgery, the tumor came back and had to be cut out. Going in to surgery, she told the doctors she didn’t want to do radiation if there was nothing in her lymph nodes. She woke up to find out she was cancer free and nothing was found in her lymph nodes.

Sally says the aftermath of chemo and surgery has been the hardest part of her breast cancer journey. She said that when she got diagnosed she had this image in her head that she was going to get sick and lose her hair, but no one prepared her for the darkness that follows treatment.

Sally says recreating her life was difficult because she didn’t feel like she knew who she was anymore after all her chemotherapy treatments. She sees the world differently and thinks differently now. Within the last six months, Sally says, her brain is starting to click again and she is starting to remember things.

Sally attended the 2016 Pink Ribbon Celebration, an annual survivor luncheon hosted by Komen Central Indiana. She remembers sitting in the audience and thinking, next year I want to be up on that stage sharing my story, which she did in 2017 as a Komen Central Indiana Ambassador. She told the crowd that one of the most meaningful things her friends did during treatment was to create a secret Facebook group that allowed people to send cards and notes to her. She also remembers jokingly getting a Henna tattoo of her birthdate on her head because she was asked for her birthdate so often during treatments.

Sally says she wants to help families, friends and children of breast cancer survivors prepare for the aftermath of treatment.

Sally is most proud of how her children handled her diagnosis and how they chose to make a positive impact. Sally is a 2017 Race for the Cure team captain of Team Mustang and has been invited to an Indianapolis Motor Speedway survivor event with Pippa Mann in 2015 and 2016.

Sally’s takeaway message to others: “I was told there will be blessings along the way but it is our responsibility to look for them.”