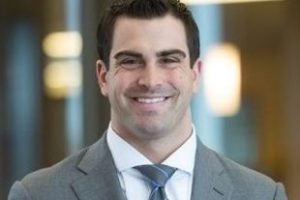 Michael Phillips is a financial advisor for Valeo Financial Advisors. He’s originally from Dayton, but he has been living in central Indiana for 10 years now. Michael and his wife Emily are proud parents a one daughter, Annabelle. Spending time with her is his biggest hobby, but he likes to golf and play guitar on the side too. They would have a pet dog, but they were outbid at the 2017 Pink Tie Ball.

The fight against cancer is a personal one for Michael. His mother was diagnosed with colon cancer in 2002. She passed away after fighting the disease for 5 years. He has been involved with Komen Central Indiana’s fight to end breast cancer since 2017, when he volunteered for Race for the Cure. He is excited for this chance to give back.

Some Fun Facts About Michael:

His Passion: “Being a father and watching Annabelle grow up.”

A Surprising Fact About Michael: “I was at one point a 240 lbs college linebacker.”

On His Bucket List: “Play all of Golf Digest’s top Indiana golf courses. Only missing Victoria National currently, but the list changes.”

What He Can’t Live Without: “It’s someone – Emily Daly.”

His Message: “Cancer is the single most evil thing I have ever experienced in my life. But there is hope, and we will find a permanent cure, so that future generations will not know the pain.”