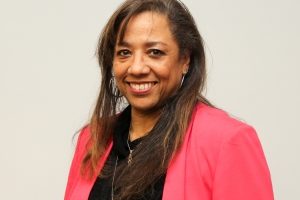 Her Story: Kathy’s story began in 1999, when she found a lump in her breast. As an executive for the Indiana Pacers, she immediately shoved the issue under the rug, for “busy season” in the NBA as quickly approaching. After undergoing both a needle biopsy and ultrasound, she was diagnosed with Stage 2 breast cancer, requiring three separate lumpectomies to get clear margins. Her first treatment lasted 11 months and included both chemotherapy and radiation.

Kathy carried on with her life as a caregiver for her brother, who passed away from prostate cancer in 2004. With a family history, she decided it was time to get a colonoscopy. While at the doctor, she made the brave decision to also get a mammogram, as it had been years since she had one done.

Twenty years after her first diagnosis, Kathy found herself diagnosed with breast cancer again. This time, she underwent a double mastectomy with a DIEP flap reconstructive surgery in May of 2018. Today she stands as a two-time survivor.

Takeaway Message: “Knowing your body and family history, as well as scheduling screenings, are imperative steps to take to catch breast cancer early. With the addition of advancements in research and medicine, we can save lives.”

Connection with Komen: Kathy is a Race for the Cure participant and volunteer at Komen. During her second battle with breast cancer, she was determined to give back and tell her story without fear, in the hopes of encouraging women and men who are fighting today.