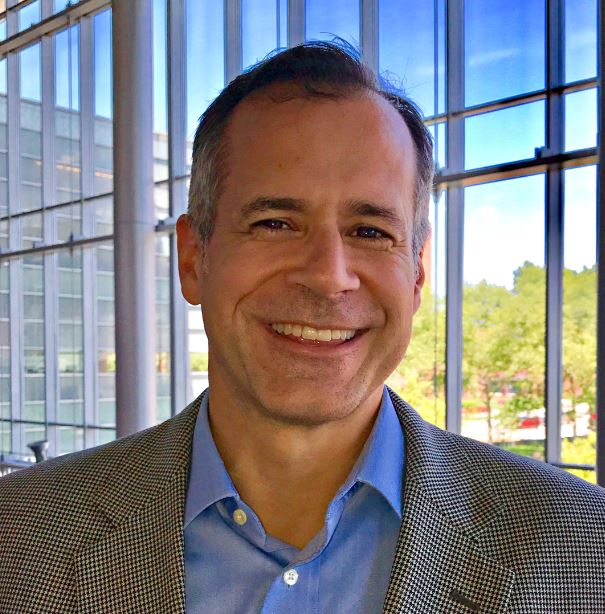 David Gard is the Assistant Vice President of University Economic Engagement at Indiana University. He is a first-generation Hoosier, grew up in Greenfield and has lived in the Indianapolis area nearly 40 years cumulatively. His office on the IUPUI campus is a short walk from where he was born.

David is single (divorced) and enjoys being involved in the lives of his two nieces. His mother, Beverly Gard, is a 20-year breast cancer survivor. She served as an Indiana State Senator for 24 years before retiring in 2012. David’s mother is a founding member of the Breast Cancer Awareness Trust, and was instrumental in making the Breast Cancer Awareness license plate become a reality in Indiana. She sponsored legislation mandating insurance coverage for reconstruction following mastectomy and authored legislation providing for confidentiality of genetic testing results, in addition to other pieces of legislation focused on women’s health issues.

Why be a Pink Tie Guy?

Inspired by my mother’s legacy of service and her lasting impact, I wanted to make a meaningful difference in waging the essential fight against this dreaded disease that has affected so many mothers, daughters, wives, and the families that love them. I want my nieces to only know of breast cancer from reading about how it was cured.

Favorite vacation spot: I enjoy adventurous travel, so whatever journey I’m embarking on next. My most recent trip included scuba diving and jungle hiking in Belize and exploring Mayan ruins in Guatemala.

Favorite watering hole in Indy: Indy has a number of great places I really like, but Nick’s English Hut in Bloomington has to be considered my all-time favorite.

Random fact that not many people know about you: While I’m known to be a huge sports fan, I also have an artistic side and enjoy oil painting and sketching. Freehand drawing a US map from memory is my party trick.

Other fun facts: After college, I was privileged to serve as a US Navy officer aboard USS Long Beach, deployed in support of Operation Desert Storm. As a veteran, I completed the Ride 2 Recovery California Challenge: a one-week, 500-mile bike ride down the Pacific Coast to raise supporting funds for recovering wounded veterans. I’ve previously run the New York City Marathon and I’m currently training for my first Half-Ironman triathlon this summer.