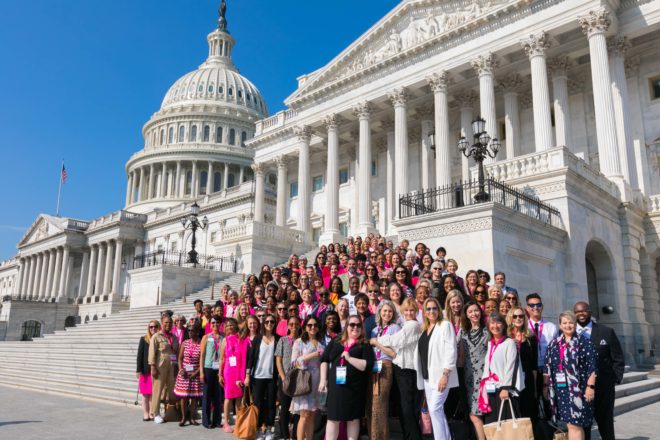 “Advocacy is showing up, standing up, and speaking up for others who may not be able to themselves.”

Last month, over 250 Komen representatives from around the country flooded into our nation’s capitol to advocate for the needs of the men and women in our local communities. Komen Central Indiana’s Mission Director, Stephanie Laskey, was one of those representatives. This was Stephanie’s second year attending the Komen Advocacy Summit in Washington, D.C., and she was able to build on lessons learned last year to make this year’s event even more successful.

The Komen team had four main asks of our elected officials: to increase funding for screening for low-income women, to preserve federal research dollars, to enact a law that would ensure that oral chemotherapy medications are as affordable as chemotherapy injections, and to co-sponsor a bill that would reduce out-of-pocket costs for diagnostic testing. Stephanie worked with Dr. Hari Nakshatri (a Komen-funded researcher at the IU School of Medicine) and Andrew Smith (a Komen HQ staffer) to meet with staff members for seven of the nine Indiana House members and staffers in both senators’ offices.

Stephanie told stories about our state’s Breast and Cervical Cancer program needing to pause its programming because of lack of funding, leading to three months of low-income individuals not having access to life-saving screening tests. She also talked about the out-of-pocket costs for diagnostic imaging as a barrier to care for people in our community. Dr. Nakshatri spoke of the startling decline of young investigators in the field of biomedical research, in part because of dwindling federal funding. Andrew told our elected officials about patients needed to choose between paying for chemotherapy or paying their rent because the cost of their oral medication was tens of thousands of dollars per month.

The staff members listened and asked great questions. They were shocked that Hoosier women went without screening tests and that breast cancer survivors sometimes had huge out-of-pocket costs related to imaging scans, even years after treatment has finished. Several staff members had concerns about the ancillary costs of diseases like breast cancer, including transportation, childcare, lost wages, etc. Stephanie was able to talk about Komen Central Indiana’s grant programs, and how our Patient Navigation program specifically helps people with exactly these issues.

Every single staff member spoke highly of their official’s unwavering support of funding federal research, especially for rarer forms of breast cancer. As one staff member noted, pharmaceutical companies need to maintain a bottom line, and therefore, logically, focus on treatments for which there will be larger numbers of consumers. It is up to the government to help support treatments when the cost of production may exceed revenue generated because fewer patients will need that treatment.

In the weeks since the Advocacy Summit, the House Appropriations Committee has released their first draft at the federal budget for the next fiscal year. In it, we saw a $2 billion increase in federal funding for healthcare research as well as a modest increase in funding for screening for low-income women. The night before Stephanie was on the hill, a Congresswoman from Michigan introduced the Access to Breast Cancer Diagnosis (ABCD) Act to the House of Representatives. We are closely monitoring the bill and encouraging members of our Indiana delegation to sign on as co-sponsors and for our Senators to push for a parallel bill in the Senate.

The day on Capitol Hill was a success, but what we look forward to is building even more momentum. We hope to continue to partner with our elected officials to ensure that everyone has access to early detection and high-quality care. If you are interested in learning more about Komen’s advocacy efforts, please contact Stephanie Laskey at slaskey@komencentralindiana.org.