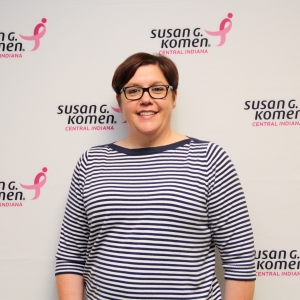 Her Story: In May 2013, Bobbie graduated from the Paramedic-to-RD program with high spirits; she landed her dream job as an Emergency Room nurse. With her new insurance plan, Bobbie was mandated to get a physical, during which her physician did a clinical breast exam and detected a lump. Bobbie shortly after scheduled what would soon be the first mammogram she had. Several weeks later, Bobbie was diagnosed with Stage 2 breast cancer. In that moment her life seemed to stop. In January 2014, Bobbie had a double mastectomy. She was determined to get the tumor out.

Without a single doubt that she had made the right choice, Bobbie went on to be accepted into the RN-to-BSN cohort at St. Francis. Life went on and she proceeded to overcome her diagnosis. However, life seemed to stop again in February 2015 when Bobbie received a kidney cancer diagnosis. She won this battle, too, after a partial nephrectomy in March 2015. Bobbie continued with her education and graduated with a BSN from the University of Indianapolis in 2017. She was not done yet. She started graduate school shortly after, pursuing a master’s degree in nursing education. In 2018, she celebrated being a five-year cancer survivor. Bobbie was determined to not let cancer halt her life, but to use to strive for who she always wanted to be.

Takeaway Message: “Cancer isn’t the end. It can be a beginning: wake-up call to not be complacent in life. Take a chance, achieve a dream. Life will go on!”

Connection to Komen: Bobbie has been a participant in Race for the Cure, and hopes to use her platform as a 2019 Ambassador to encourage others that life continues.